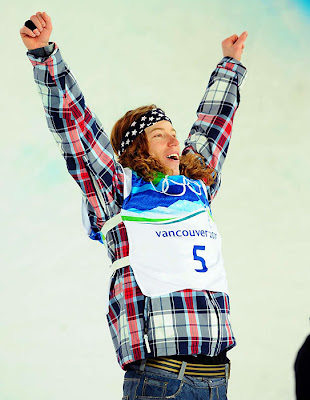 The United States had never won six medals in a single day at the Olympics. We have now! On Wednesday, the U.S.A. team captured 3 Golds, 1 Silver, and 2 Bronze. No other country has ever garnered more than six on a single day. Lindsey Vonn, Shaun White (above), and Shani Davis all won their events. Julia Mancuso took home a silver, giving the Americans a one-two finish in the women's downhill, and Scotty Lago and Chad Hendrick earned bronze for the United States. No one was surprised at White's victory, and Davis has been an American hopeful as well. However, the sweetest triumph had to be Vonn's victory in the downhill. Only a week ago she wasn't even sure she would be able to ski due to a severe shin injury. But ski she did, overcoming the course as well as her injury. A great day for the American team, and a great day for Lindsey Vonn!