Excessive Celebration: Is It Really That Excessive? 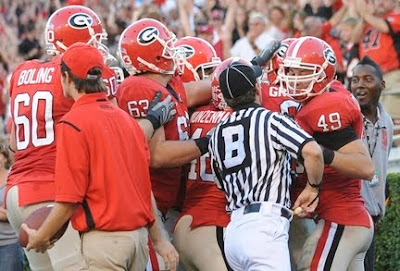 I don't think you make a controversial rule better by making the penalty for it tougher. But that is what the NCAA is considering doing with the excessive celebration penalty in college football. They would like to make the penalty a live-ball foul, which would nullify the play and impose a fifteen yard penalty from the spot of the infraction. Although the proposed new rule would only impact live-ball unsportsmanlike personal fouls, the rules committee doesn't seem to be addressing the inconsistent nature of the foul and the way it is called by officials. This call is far too subjective, and fails to consider the genuine emotion of the game. The ultimate goal in a football game is to score touchdowns,and when players do it is a big deal. Emotions do take over, and the NCAA has done a good job now of getting players to understand it is a team celebration rather than an individual sideshow. I agree with the penalties for taunting and down right showboating, but let the kids enjoy the thrill of a touchdown. Revamp the perception of celebrating, and quit adding to the penalty for players enjoying the standard of success in a football game.