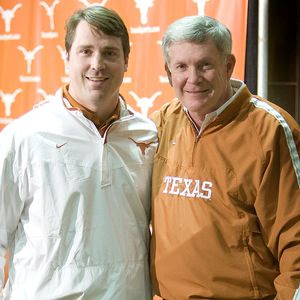 I've never been a big fan of the title "Head Coach in Waiting". It seems to me to put both the school and the designated coach in the throws of too many variables in the future. Things change over the course of time for both parties, and I think it could put both of them at a disadvantage, or awkward situation, at some point. Texas (above) and Maryland are the only two schools with CIWs on staff currently, so perhaps it isn't going to be as 'trendy' as it appeared. And it certainly won't if the NCAA passes yet more legislation. For example, a college head coach is allowed only one visit per recruit, and cannot leave his campus to recruit during the spring evaluation period. Assistant coaches are the ones doing the majority of the road work by far. Now the NCAA wants coaches-in-waiting to be bound by the same recruiting restrictions as head coaches. This would put a heavier work load on other assistants on staff, and thus be a detriment to the entire recruiting process for that particular school. Sounds o.k. to me. If you're going to be the 'next' head coach , you might as well start acting like it.