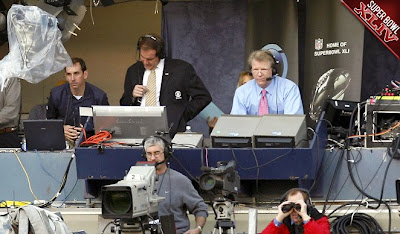 NBC holds the Super Bowl record for average viewers with 98.7. Today, CBS hopes to see that record fall and be the first network televising the big game to draw 100 million viewers. If the game is close and interesting, the network thinks it's a gimme; if not that close but has some interesting sidelights going on, the 100 mil is still possible. The fact that NFL regular season ratings have been very good all season is another point in the favor of CBS. It is also a 'Super' plus that the game features the top two seeds from each conference for the first time since 1993. Indianapolis is the favored team with the experience of having been here before, while New Orleans is the extremely hungry underdog playing in the league's showcase spectacle for the first time ever. Las Vegas has the Colts as a 5.5 point favorite over the Saints going into the contest. Veteran Jim Nantz will be calling his second Super Bowl, along with partner Phil Sims who has the experience of five previous Super Bowls. CBS will be televising its seventeenth NFL championship contest. Are you ready?