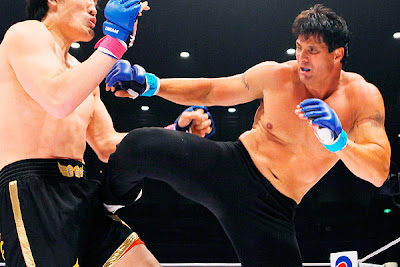 It seems that Jose Canseco has always got a lot to say about a lot of things, but always after the fact. He's always sticking his nose into someone's business, always having the 'inside scoop' on something that went down earlier, often calling someone a liar, and now trying to get a little piece of the action from Herschel Walker. Canseco had one MMA fight and got lambasted; Herschel had his MMA debut this past weekend and walked out of the ring victorious. So, after Walker has received some positive press, here comes Jose. Today, Canseco "called Herschel out", saying he might have "to show Herschel Walker who the real bad boy of the Sports Industry is". I don't know about the 'bad boy' deal, but Canseco is definitely the original "bottom-feeder " of the sports world. And if the truth be known, Jose Canseco doesn't want any part of Herschel Walker in the ring. But I would almost pay to see that one.