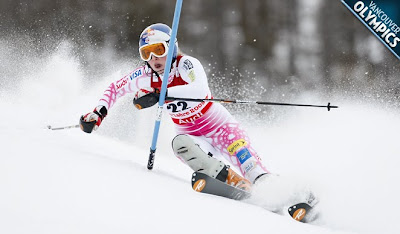 Lindsey Vonn, the two time overall World Cup Champion, skied Sunday for the first time since February 2nd, and pronounced herself almost ready for the first event of the Vancouver Olympics for women downhill skiers. The American skier is our best hope for Olympic medals in women's downhill events, expected to capture three or four medals. Her first event will be the 'Downhill', which begins Wednesday. The downhill is her best event, where she has won five of six events this season. All downhill events have been moved back due to weather and slope conditions, which has proven to be a huge benefit to the recuperating Vonn. She suffered a severe shin injury that has threatened to keep her out of these Olympic Games altogether, but the extended time off the slope has enabled her to be able to recover just in time. I have a feeling she will be "Von-tastic"!
Posted by Sports Dawg at 10:06 AM