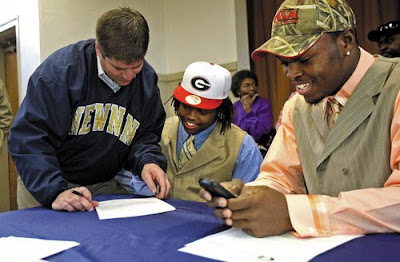 National Signing Day 2010 has come and gone. Basically, the rich got richer, so some got all but all got some nevertheless. There's so much high school football talent now that all major programs really do have a legitimate chance to be successful. However, the flip side to that is, of course, that the competition is so fierce. Not only the competition to sign certain kids, but the competition on the playing field. Much of the suspense of signing day has evaporated because most high schoolers verbally commit to schools long before that magical day in February. Most of the suspense comes now from kids who back out on their commitments and sign elsewhere (Just ask Georgia). Recruiting analysts rank recruiting classes by the number of 5-Star, 4-Star, and 3-Star players they sign. That's understandable, because you do have to have talent to succeed. Like I always say, "you can't make chicken salad out of chicken 'poop', you've gotta have the chickens!" But with that being said, I think there are three main goals for a school to accomplish in having a successful class:

When schools do these things, they might not be ranked high in recruiting polls, but they'll probably be ranked consistently high in the post-season polls. It's not hard to figure out which one is most important. Do you think your school was successful this recruiting season?