A Blast From the Past: Bird -vs- Dominique 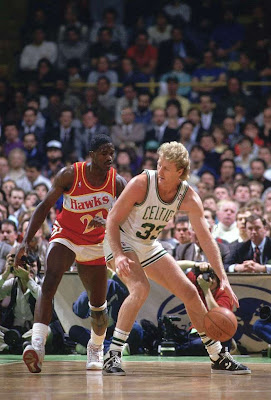 As Boston advances in this year's NBA playoffs, I'm reminded of the 1988 Eastern Conference Playoffs. Bird and his Boston Celtics defeated Dominique and his Atlanta Hawks in 7 games to advance to the next round. It was a classic confrontation of two super stars going head to head. Wilkins displayed all of his enormous talent, but it just wasn't enough to overcome the tenacious and savy Larry Bird. There probably have not been many, if any, athletes to maximize what they had more than Bird. The two main things he brought to the table were the canny ability to make everyone around him better, and the 'know how' to win. Thanks for two great careers guys!