Jack Nicklaus and The Memorial Tournament 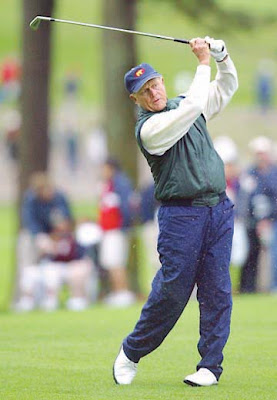 The 33rd Memorial Tournament is being played this week at Muirfield Village Golf Club in Dublin, Ohio. The tournament was founded by and is hosted annually by Jack Nicklaus, and is played on the course he designed. The Memorial is so named because it honors present and past golfers who have made significant contributions to the game. This is "Jack's Tournament", and because of that it is considered to be one of the most important stops on the PGA tour. The first Memorial was played in 1976 and was won by Roger Maltbie in a playoff over Hale Irwin. Incidentally, Nicklaus won his own tournament the next year, and in 1984 he became the Memorial's first two-time winner. He last played in the tournament in 2005. In 2000, he was selected by the Captain's Club as that year's honoree.