Come on Back, Bobby Cox! 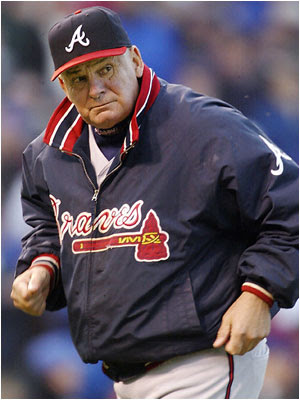 Bobby Cox is in his 23rd year of managing the Atlanta Braves. He has been a manager in the 'Bigs' for 27 years. This week, at the age of 67, Cox signed a one year contract extension to manage Atlanta through the 2009 season. At least 2009. The contract could have been for as many years as he wanted it to be for, but at this stage of his career, he prefers to take it one year at a time. He says he's having fun, and as long as he 's having fun, he will continue to consider returning. Some refer to Cox as the best tactical manager in the game. I note the success he has in handling his players. He has no problems relating to veterans, rookies, free agents who land in Atlanta for just a season or two, or kids who come up through the Braves tremendously fruitful farm system. All of them say they love playing for BC. He has 14 division titles and five pennants to go along with his lone World Series ring. He has been manager of the year four times. He holds the Major League Baseball ejection record at 137 and counting. This is a notable statistic because one heck of a lot of his dismissals have been due to him taking up for one of his players. He has sacrificed himself often to keep a player in the game. Don't think for a minute this goes unnoticed by those players. This is just one of the reasons he is known as a 'player's manager'. He's also known for letting players play through slumps without the fear of getting benched. He tries to play as many players as possible throughout the season, keeping regulars fresh and helping his bench players stay sharp, focused, and productive. He likes to get relief pitchers back into games as soon as possible after bad outings, letting them know his confidence in them hasn't wavered. He's constantly shouting encouragement from the dugout when Braves players are at the plate. There are many reasons to want to play for this guy. Not to mention the fact that he wins. He has more than 1,927 victories with Atlanta. His teams are always competitive year in and year out, and for the most part play good, sound, fundamental baseball. It is true he has had a lot of talent to work with in Atlanta since the early 1990's, but he also has had a lot of player turnover during those years (thanks free agency), yet he has always been able to mold winning teams. So Bobby, keep molding this year, in 2009, and for as many down the road as you choose. We'll take a "BC Powder" and come back strong!