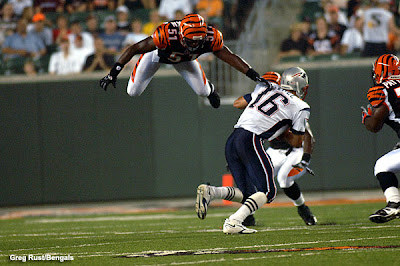 I have a friend who lives in Odell Thurman's hometown of Monticello, Ga. He once told me, when Odell was a linebacker at UGA, that it wasn't IF Odell would get into trouble in Athens, it was WHEN. Sure enough, he did get in the proverbial dog house while in college. On to the NFL and the extended suspension from the commissioner, the eventual reinstatement, and now the outright release by the Cincinnati Bengals. I really think Thurman is a star-crossed linebacker. By that I mean he probably will be in trouble again. It's almost his nature. Wrong place, wrong time. My fault, your fault, nobody's fault (remember John Wayne?). Whatever the reason or circumstance, fate will probably intercede. Maybe just bad karma. Even though you can see I am not real high on Odell the person, the dude can play some football. That certainly doesn't justify the character issues, it's just the truth. So yes, I think the Falcons should take a chance on him. They can get him cheap. They can structure his contract so that he's gone at the first hint of trouble. Brian VanGorder, the Atlanta defensive coordinator, is familiar with him from Georgia where he was DC and his position coach. And after all their roster cuts, they can use him. It is true, the Falcons can take no more shots in the bad behavior department (wasn't there some dog fighting issue not long ago with a quarterback?). So, Mr. Blank, sign him, work him, then keep him or cut him. The roads that lead into Atlanta also lead out of Atlanta. That interstate system might doze, but it don't ever close!