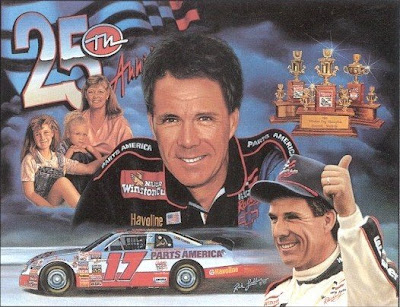 Here I go again after another commentator. During the late stages of Saturday night's Nascar Sprint Cup Series race at Richmond, race leader and dominator up to this point, Denny Hamlin,
begins slowing and radios his crew he has a tire going down. He gives up the lead, even falling out of the top 10. In the broadcast booth, Darrell Waltrip says that Hamlin has to be sure he has a tire going down before he pits. He relates that at this point in the race you just have to be positive. All this time, Hamlin continues to fall back in the pack. I'm with you DW, but I don't think Denny would be losing ground if something wasn't amiss. Well, Hamlin ends up blowing the tire that DW defended, crashes into the wall and brings out the caution flag. It was an inevitable event. Now this is when Waltrip blows it for me and I KNEW he was going to say it. He contradicts himself by saying maybe Hamlin should have pitted before the accident happened. DW, you're the one who said he had to be sure. Well he certainly is sure now! And I'm sure now that you are as inept in the booth as I have always thought. I'm glad I'm not a Nascar nut, because guys like Darrell and his partner 'Country Bumpkin' Larry would 'drive' (no pun intended) me nuts! Keep 'tuning up' those grammar tenses too, Good Buddies! Oh yea, it's a shame your #88 didn't win boys. I could tell by your "partiality" ya'll really wanted him to end that losing streak. Maybe next race...then again, maybe not.
Posted by Sports Dawg at 8:47 AM