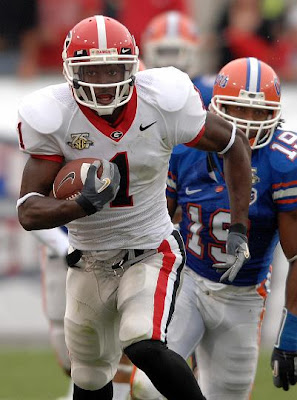 Mohamed Massaquoi was recruited by the University of Georgia out of Independence High School in Charlotte, North Carolina. Coming out of high school in 2004, he was rated the number 4 receiver by rivals.com. During his career at UGA, he has been over 500 yards receiving in only one year, and has not established himself as the 'go-to' receiver everyone thought he would be. He hasn't had a bad career, but it hasn't been of the super star caliber either. All of that could change as he enters this, his senior season. Mo-Mass is kind of like a pro player in the final year of his contract. He needs to have a breakout year not only to help Georgia achieve all of its goals, but also for himself to show the scouts he is ready for the next level. He has proven he can be a big play receiver, but he has to develop consistency. Consistency in his ability to ALWAYS make not only the big catch, but every catch thrown his way. He has to be Georgia's receiver that other teams fear. He can be. He has that much talent. He runs great routes. He has improved tremendously as a blocker. He has a great supporting cast around him. This is his year!