The Essence of Sports 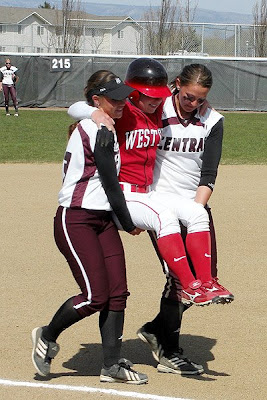 If you missed the story about tremendous sportsmanship in the Western Oregon -vs- Central Washington softball game last Saturday, I need to do you a huge favor and share it with you. In the WO/CW game, WO's Sarah Tucholsky blasted a home run OVER the center field fence. However, at first base she wrenched her knee and could not continue around the bases. Rules state that a runner cannot be aided by teammates, and a pinch runner could only be allowed first base. After consulting the umpires, CW's Mallory Holtman and Liz Wallace carried the injured Tucholsky around the bases to complete the home run. As they reached home plate, they were greeted by a standing ovation from the fans. The two Central Washington players then handed the slugger into the arms of her teammates and went back to their respective positions. The home run, the first of her career, propelled Western Oregon to a 4-2 victory. CW's coach, Gary Frederick, called the gesture of sportsmanship 'unbelievable'. Holtman said since she hit it over the fence and was in obvious pain, she deserved it! The injury has been diagnosed as a possible torn ligament, likely ending the senior's season and career. She is perhaps leaving the game, but she and the CW players left us with a great story.