Jeff Francoeur Busts Back Out 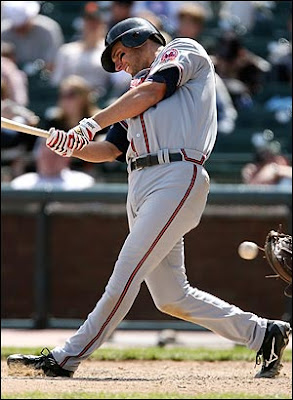 Jeff Francoeur had gone into a funk. At the plate he was just there. He couldn't buy a clutch hit. For me, if he was up with 2 outs, it was inning over as far as I was concerned. I had been thinking for weeks: Bobby, sit him down a game or two. Give him a different perspective on the game; the one from the bench. He was hitting below .270, with only 4 dingers. I suspect many of his 30 RBI's came when a games outcome was not in question. He had played in 370 consecutive games. It was time for that mini streak to end. Come on, he wasn't shooting for Cal's record or anything. He needed to sit. And sit he did. After playing in game one of a day/night doubleheader against the Mets on Tuesday, Cox didn't pencil him in the lineup for game two. Goodbye streak, hello rejuvenation!. In Wednesday night's game against the dreaded Mets, Frenchy goes 3 for 4 with a triple, homer and four RBI's. The Braves go on to pound the Mets 11-4. Well rested and battle tested! Now he and BC both know Francoeur can have a day off, so I'm guessing he will have several more this season. That will again be good for Jeff and the team.