A.J. Green: Living Up to the Hype! 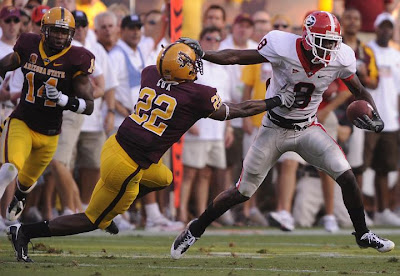 Georgia's A.J. Green was one of the most highly touted receivers coming out of high school last year. The South Carolina prep star slipped out of that state right under Steve Spurrier's wishful nose. Saturday night in Tempe, Arizona he showed the entire nation why he was so sought after. After a break-out game against the Sun Devils, where he caught 8 balls for 159 yards with one trip to the end zone, he left all doubters in his wake. The kid has arrived. And then some.