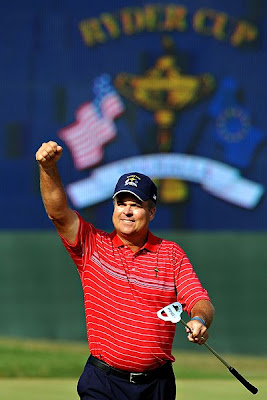 Sleep well tonight, America. the Ryder Cup is back where it belongs. Captain Paul Azinger's team defeated the Europeans 16.5 to 11.5 to reclaim the cherished cup after last owning it in 1999. Forty eight year old and Kentucky native Kenny Perry was an integral part of the victory, one that he said "made my career". Then the young guns like J.B. Holmes, Anthony Kim, Boo Weekly, Ben Curtis, and Chad Campbell kicked in to help secure the cup by the largest margin for the Americans since 1981. It won't be hard to swallow that champagne at Valhalla!