Chad Johnson is Now Who? 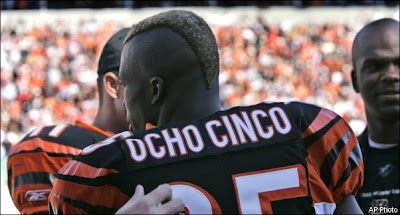 I fully agree with the UNCF, a mind is a terrible thing to waste. In the case of Chad Johnson, the only question is how much is actually there to waste? And excuse me, the legal name now is Chad Javon Ocho Cinco. And I did say legal because he had his "real" named legally changed last week. He states he did it because "I'm having fun". I would have voted for the moniker his coach, Marvin Lewis, suggested: Ocho Psycho. However he, along with the rest of us, does have that inalienable right to trek down to the local courthouse and make a 'name change'. And he isn't the first high profile athlete to do so; do you recall Cassius Marcellus Clay and Lew Alcindor? But to be brutally honest, I scarcely think he is quite the caliber super star that Muhammad Ali and Kareem Abdul-Jabbar were. So anyway, Chad changed his name to his jersey number. In Spanish. Habla Espanol? Donde esta' el bano? I think I'm going to be sick! I suppose now he can wear Ocho Cinco on his jersey without being fined by the NFL. Whatever...
Number 85 for the Cincinnati Bengals has the God given ability which enables him to possess the attributes necessary to snatch a thrown hunk of oblong leather out of the air and run very fast with it. Nothing more, nothing less. No brain surgery, no atom splitting, no saving of mankind from any doomed destiny. In other words, you can change your name to your license plate number is Swahili and no one will care. You're just not as special as you think you are. After all, Ocho Cinco is eighty four away from Numero UNO!
Posted by Sports Dawg at 9:08 AM