Back To Black -vs- 'Bama 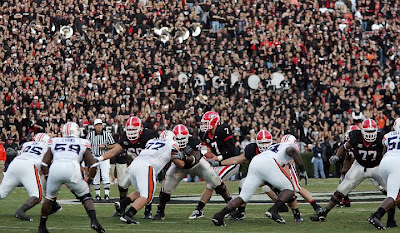 For only the third time in its storied history, Georgia will don their black jerseys for Saturday night's crucial SEC battle with Alabama. The team is also encouraging the "Bulldawg Nation" to 'Black-Out' Sanford Stadium by also wearing black attire. The news of Coach Richt's decision on this prompted one Alabama assistant coach to quip, : "They're wearing black because they are going to a ______ _______ funeral." That might be the case, but whose funeral it will be remains to be seen! The first time the Bulldogs dashed through the Hedges wearing black, they defeated Auburn 45-20. They then annihilated Colt Brennan and his Hawaii team 41-10 in the Sugar Bowl. (Don't fret over that thrashing too much Hawaii, no one in America would have defeated the Dawgs that night!). If Georgia hangs another 40 on the board wearing black this weekend, I assure the above mentioned Crimson Tide assistant that it will be a "Bama Burial". Coach Richt told the Dawg Nation that we would probably see the black jerseys once or twice a season. Opinion On Sports guessed we would see them in Jacksonville for the Florida game since we are the 'home team' (Ha!) this year, and possibly Alabama or Tennessee. Well, the guess was half right, and I'm still predicting "Black in Jax"! (Remember, you heard it here first!). We sure could use 40 down there.