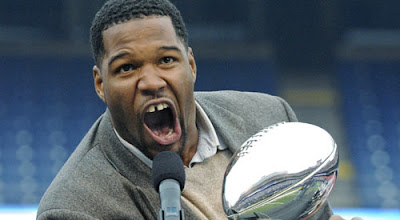 This is absolutely none of my business, but since the title of this thing has to do with "opinions", I might as well proceed. After tuning into 'Fox NFL Sunday' for a very few minutes yesterday, this thought occurred to me regarding Michael Strahan: Why doesn't he have that 'gorge' between his front teeth repaired? I swear that gap is growing before our very eyes. It's huge. He must have to use a rope to floss it! Most photogenic he is definitely not. It isn't like the dude can't afford it, even though it would require a truckload of porcelain I'm sure. His dentist would be glad to use the 'ole PC to generate a computer image of how much better he would look like "after", as opposed to "before". Maybe he feels like "The Gap" is his trademark and he doesn't want to 'part' (no pun intended) with it. I hate to tell him that 'ugly' is not the descriptive one should aspire to being known for, especially when one has the means to change that 'ugly' into at least 'less ugly'. I mean come on, you have to consider how much you have to work with here. Whew... At least he should do it for us now that he is supposedly a TV personality. It certainly would make tuning in and actually watching the Fox pregame show a little easier. Come on Michael, take one for the team. Fill that gap, bridge that gorge. "Dare not deny to be a GQ kind of Guy!"