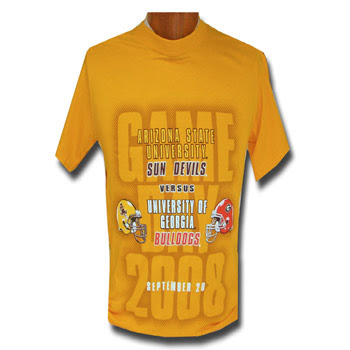 There has been much speculation this week in the media and on the blogs concerning the decision of the Georgia coaching staff to wait and travel to Arizona State on Friday, as opposed to leaving on Thursday. The Bulldogs face the Sun Devils Saturday night in Tempe. The explanation given by Coach Mark Richt was to keep their travel plans the same as for any other road game, even though the distance is much greater. One would be hard pressed to argue with a head coach who has a winning road record of 26-4 in opponents home stadiums. He's done his home work, and obviously he feels this is the best plan available to his team. One positive with all of this is that when 8:30 P.M. rolls around, the stands will be rocking with the "Red and Black" as UGA fans have been buying up tickets for this game since the mid-summer months. I tend to be more concerned about the arrival on the 'back end' of this trip as opposed to departure on the 'front end'. Get the picture (thanks, Larry!): The Bulldogs depart Arizona as soon after the game as possible that night. They will not arrive back in Athens until the daylight hours of Sunday morning. The players and coaches will be travel weary, not to mention being weary from what I believe will be a tough game. Now, they must begin to make preparations to face a formidable SEC foe in the Alabama Crimson Tide. The recovery time from the Arizona State game will be minimal at best. The 'Bama game is "Between the Hedges" at night, so that has to be a good thing for Georgia. If we can weather the storm of these two weekends, we at least have an open date following the Tide and before facing an enigmatic Tennessee Volunteer team in Athens. And guess what Dawg Fans? This isn't even the toughest part of the schedule for Richt and his Pups! Don't forget about that four week road venture coming up that starts with LSU in Baton Rouge, followed by the hated Florida Gators in Jacksonville, and trips at the end to Lexington and Auburn just to keep things interesting. Whew...we will all enjoy that open date with the Dawgs October 4th!
Posted by Sports Dawg at 10:26 AM