The "Old Ball Coach"...Getting Older by the Outing 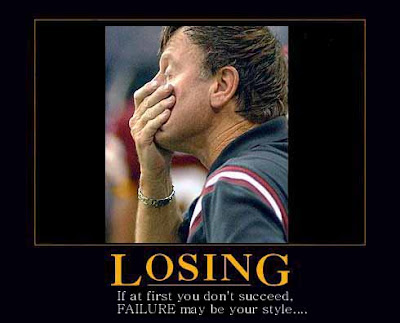 I've always heard this expression: South Carolina, where old coaches go to die. Well, Steve Spurrier is dying a slow death there himself. After losing to Vanderbilt University Thursday night 24-17, his record at Carolina is 22-16, and he is 11-13 in the conference. 2005 was his first year as the Gamecocks head man. (And please note: if you're playing regularly on Thursday nights, your program just might not be at the point you would like it to be - this is the second consecutive Thursday P.M. for South Carolina. We have a school in Atlanta full of Bumble Bees who like to toss it around on Thursdays also). Since this is Spurrier's fourth year, he's playing with a lot of his recruits. Not recruits like he enjoyed at Florida, but his signees nevertheless. He had to realize he would not have that rich talent pool to select from in South Carolina. If he didn't know it before, he sure as heck knows it now! As for the conference this year, the Gamecocks will have their best chances of victory at Ole Miss and Arkansas in Columbia. That means Spurrier could be on the short end of SEC game scores at least five more times this season. He will need to defeat cross-state rival Clemson at the end to avoid being completely chewed up in the state. He will have no problem out coaching Tommy Bowden, but he can't match up talent wise with the Tigers at this point. But who in the world will care about that game outside of that state at that point? Spurrier's only pal after it's all said and done might be the that lisp speaking fool on ESPN, old "Loose Bolts", Lou Holtz himself. If you recall he died at the University of South Carolina a few years ago. Just like Steve Spurrier is doing now.