Tom Brady: Torn ACL - Out For The Season 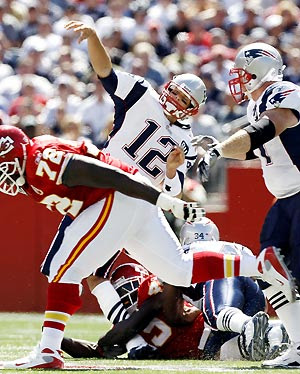 Tom Brady suffered a season ending knee injury in the first quarter of Sunday's season opener against the Kansas City Chiefs. Brady had his knee buckle on him after being hit by Chief's safety, Bernard Pollard. Unofficial sources have confirmed the diagnosis in a torn anterior cruciate ligament. Brady currently has the third longest starting streak in NFL history with 128. New England will now turn to backup Matt Cassel, as they did for the remainder of the game Sunday. Brady had a foot injury the latter part of the 2007 season, and missed all four exhibition games with that same injury this preseason. Patriot's coach Bill Belichick is as resourceful as they come, but the reality of the grim situation is this: There is only one Tom Brady.