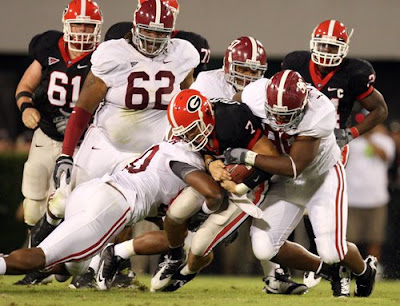 Perhaps Larry Munson saw this 'tail trashing' coming, and figured at his age he just couldn't sit through it. At least at home, he would have the remote to ease the pain. Just like in the hospital when you get to push the button for another pain killer. Let Scott Howard figure out what to say on a night when none of the 'Bulldawg Nation' knew what to say. And what you wanted to say couldn't be said over the airways. It's a good thing UGA VII is young and doesn't know what's going on yet. This lopsided loss to Alabama would have killed his Dad for sure. It's a good thing "Six" didn't have to live through it, and it's a good thing he wasn't sitting on the "Game Day" desk when Lee Corso put on that elephant head. UGA VI just would not have put up with that crap! But "Seven" is just a Pup, and that is what his (and our) team looked like Saturday night. Bullpups. Out-manned, out-coached, out-disciplined, out-prepared, out-played, and a lot more "outs". Like fall out. And just how far will we fall? Just when the chips were all falling into place. Southern Cal loses Thursday night to open the door on the national picture. Florida and Tennessee both lose Saturday to open the door on the SEC East picture. And then we lose, and we lose in a huge way. Not just derailed, but dominated. I, for one, did not think we would make it through this land-filled schedule unscathed. Our conference is just too good, too tough, week end and week out for that. But I thought our days of being handled the way 'Bama handled us were in the past. We've recruited so well over the past several years. Our talent level is so high. We are at the point to where we can compete with any team in the country anywhere. I thought. We did not compete for an entire half Saturday night, and then it was too late to compete against a solid Crimson Tide team. You can't give away an entire half of football and spot an upper echelon team in the SEC 31 points. That's not competing. There are no off weeks from September to December, but we took the night off last night. Munson played out, the Black jerseys played out, we played out, and Alabama played 'lights out'. I guess it was our funeral after all. At least we all dressed for the occasion.