Billy Martin: Hired and Fired 5 Times by "The Boss" 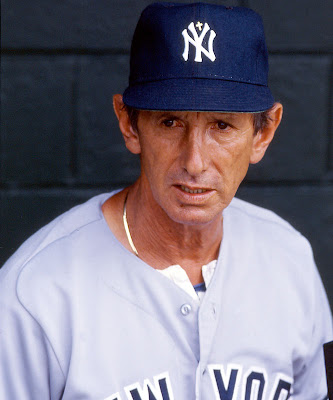 Billy Martin was hired and fired five times by the late Yankee boss George Steinbrenner. Their love/hate relationship was volatile and tumultuous, but the Boss knew Martin could manage. His intensity and knowledge of the game were upstaged only by his insanity and often times irrational behavior. Steinbrenner would have to fire him to clear the air in the "Bronx Zoo", only to bring him back when the team desperately needed an overhaul. In 16 seasons as a Major League manager, the self-destructive Martin won five division titles with four teams, two pennants, and one World Series title. When he died on Christmas Day in 1989 in a one car accident, he was a special consultant to Steinbrenner. Billy Martin lived to be 61.
Posted by Sports Dawg at 4:42 PM