Mark Richt: The Dean of the SEC Coaching Fraternity 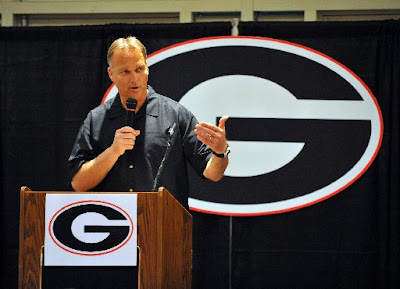 As Mark Richt enters his 10th season as Georgia's head football coach, he is the longest tenured Southeastern Conference coach by four years. After completing this 10th year, he will join an elite group of only eight of the 72 coaches hired since 1970 to last more than 10 years at a single institution. Richt won at least ten games in five of his first six seasons, and at least nine in eight of nine seasons. His winning percentage at UGA is .769, which is eighth best in SEC history. He is, however, coming off his most dismal season where his Bulldawgs finished with a sub-standard record of 8-5. His name has been mentioned, rather unjustly I might interject, as being one of several coaches on the "Hot Seat" as we enter the new season. Believe it or not, the 8-5 season doesn't have as much to do with the negativism toward Richt as his 2-7 record against hated rival Florida does. No matter how good a year might be as far as wins are concerned, if Georgia falls to the Gators there will be an asterisk by that season. He has to beat Florida very soon, and then win his 'share' against them from then on. The "Hot Seat" talk is premature, because after the next five months Richt will either be completely out of those talks or dead solid in the midst of them. I don't think it will even be an issue by then. Georgia needs Mark Richt. There aren't too many like him out there.
Posted by Sports Dawg at 10:12 AM