Lebron James: A Ton of Cash, A Thimble of Class 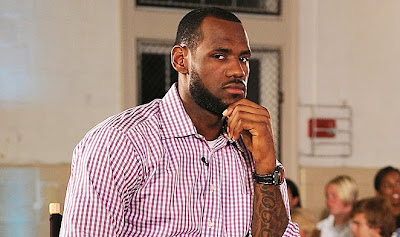 Please understand this. I wouldn't walk across the street to watch an NBA game even if it was free. I love college basketball, but I am not a fan of the pro game. It is the only form of Dr. Naismith's game where walking with the ball is allowed, and is exercised on one heck of a lot of trips up and down the court. From a very admittedly narrow viewpoint, I think most of the participants are spoiled millionaires. But I digress..The Lebron James free agent announcement was a debacle. ESPN really took a black eye for that ridiculous program they aired. I could care less where LBJ plays the next 5 years, but just sign the contract without rubbing Cleveland's nose in it. By signing with the Miami Heat and joining Dwayne Wade and Chris Bosch and with James' terrible play in the playoffs, I don't think he wants to be the guy to 'take the last shot' anymore. I don't think he can handle the blame for a big loss. I don't think he relishes that role. He can't handle the heat (no pun intended). And now he doesn't have to anymore. Just pay him and surround him with a cast that that enable him to wear a ring. He can't do it without them.