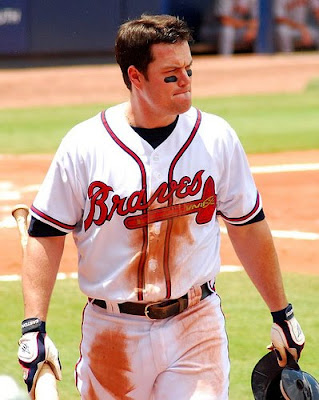 Matt Diaz is a ballplayer's ballplayer. He's willing to do whatever it takes to win, and he doesn't seem to get all wrapped up into how he looks doing it. He's the kind of player a fan enjoys watching play the game.I believe it's fair to say that "Matty " is somewhat of a streak hitter. Perhaps platoon type guys get that way, and he's that way now. In Tuesday's 4-1 win over the Padres, his two-run homer drove in both the tying and winning runs, and was the third home run he's hit in his last three games. In the thirteen games since coming off the Disabled List, Diaz is hitting a sizzling .400 with six doubles, four homers, and eleven RBIs. He never seems to cheat himself with an at-bat. He'll take some nasty swings at some questionable pitches, but his results speak for themselves. Matty's on fire, and I hope he stays that way.
Posted by Sports Dawg at 9:32 PM