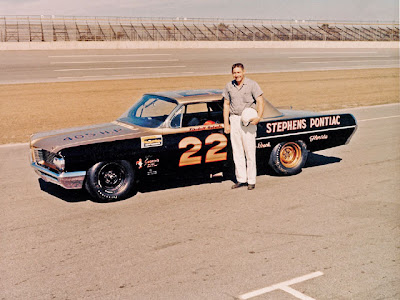 One of the first real superstars of NASCAR was Glenn "Fireball" Roberts. Great racing name, huh, except for the fact he earned it as a young American Legion baseball pitcher. Although Roberts tragically died at the age of 35 due to burn injuries suffered in a flaming wreck in the 1964 World 600 at Charlotte, he nevertheless accumulated 33 victories and 35 pole positions. He was a colorful, larger-than-life, go for broke racer who performed at a very high level during the "Golden Age" of NASCAR. Characteristically, "if he didn't show for the dough, you'd know he's blow". The restricted, rules-laden sport that we know as today's NASCAR can't hold a candle to the sport as it was known in Robert's day. No teammate crutches, no partners on the track, and no restrictor plate follow-the-leader races. If Fireball had been around for this modern age of stock car racing, he would have stopped competing in today's micro-managed sport a long time ago. And I for one wouldn't blame him. In fact, I would applaud him.