Bobby Cox: Thumbs Up So Far... 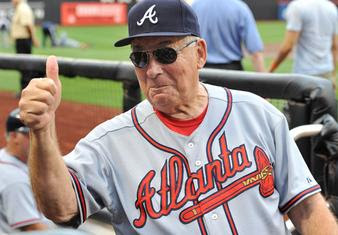 The Atlanta Braves begin the stretch run of the season tonight at Turner Field against the Milwaukee Brewers. They enter tonight's fray with a 4 game lead over National League East foe New York. With the season half over now, every game will seem to take on a bigger significance, especially since New York and Philadelphia aren't fading away by any means. Every Brave who was dinged up should be back in the line-up tonight, and the clubhouse will probably be perked up a notch or two since temperamental shortstop Yunel Escober now resides north of the border. It should be an exciting sprint to the finish between the Braves, Mets and Phillies. Even though it doesn't appear that Florida and Washington will be in contention, they will still have a lot to say about who finishes on top. Stay tuned, because September is "looming large".