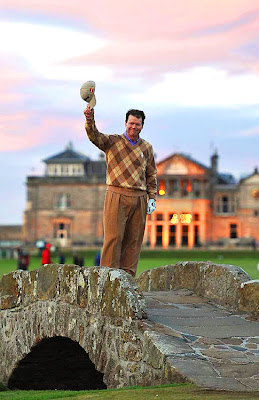 Tom Watson missed the cut at this year's British Open at St. Andrews by two shots. However, by finishing in the runner-up spot in last year's Open he earned a five year exemption to continue to play in the tournament. The 60 year old Watson is shown above saying goodbye to the throngs at the "Old Course" because he knows 2010 is his last visit here. The Open will not return to the hallowed grounds of St. Andrews until 2015. The five-time British Open Champion stooped to kiss one of the stones of the storied Swilcan Bridge farewell before going on to make birdie at the finishing hole.
Posted by Sports Dawg at 4:29 PM