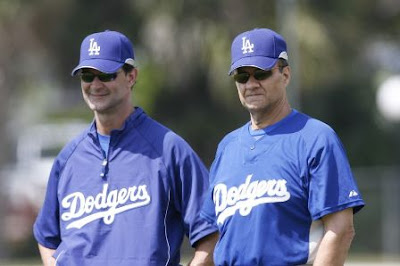 Joe Torre (R), was one of three Dodgers ejected from Tuesday night's loss to the San Francisco Giants. In his absence, hitting coach Don Mattingly (L) acted as on-the-field skipper. Mattingly went to the mound for a ninth inning strategy meeting with closer Jonathan Broxton. As he was leaving the dirt area on the mound, he took one step onto the grass infield and turned to answer an infielder's question while stepping on the mound area for a second time. Giants manager Bruce Bochy called for a citizen's arrest (a la Gomer Pile) of Mattingly for making two trips to the mound in the same inning. The umpires concurred with Bochy, sending Broxton to the showers earlier than he expected to go. His relief, George Sherrill, was only allowed eight warm-up pitches and the Dodgers, leading at the time, went on to suffer their sixth consecutive defeat. OK, now that the stage has been set, here's the bottom line. The umpires enforced the rule all wrong. Broxton should have been allowed to pitch to one more batter and Mattingly should have been ejected from the game. Even without that happening, Sherrill should have been given as many warm-up pitches as he needed. The outcome of the game may or may not have ended the same, but at least get it right to begin with. It wasn't a split second judgement call, it was a rules interpretation and execution (or lack there of). Shouldn't a Major League umpire know the rules book completely? At least much better than Congress knows the health care bill. Come on guys, run with the big dogs or stay on the porch.