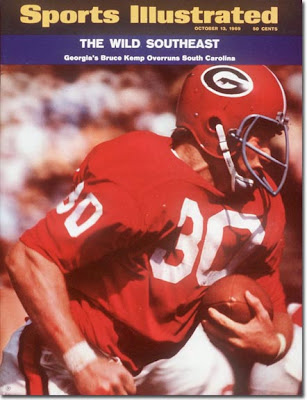 After learning during the broadcast of G-Day that on each players locker is the name of every UGA player who has worn that number previously, I thought you might enjoy a look back at this October 13, 1969 SI Cover. It features Bulldog tailback Bruce Kemp and was titled "The Wild Southeast". Subtitled "Georgia's Bruce Kemp Overruns South Carolina". Nothing like 'old school'! By the way, listing past players on today's lockers is a pretty nice touch, Marl Richt!