A Red Sweater and A Red Rose! 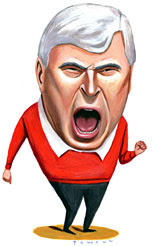 Bobby Knight resigned from his position as head basketball coach at Texas Tech before the conclusion of the 2008 season. Subsequently, he was hired by ESPN as a college basketball analyst for the duration of the season (and perhaps longer). I only read/heard one comment about Knight quitting on his Red Raiders, which in fact is what he did. I've often wondered why the media has seemingly held Knight in such high regard, or why they have afforded him such leeway. I realize that he is highly successful (just look at his win total), his players graduated, and his programs ran free of infractions and probations. But so many times his irrational behavior has been condoned, overlooked, down-played, or you-pick-a-term. This has been true of actions on the court as well as in the interview room. He seems to so many times come out "smelling like a rose". One former player has said something to the effect that the way he was being told to behave and act, was nothing like what his mentor was displaying in public, and at times it was somewhat difficult to understand. It is probably true that his methods of intimidation have probably come from the tongue, more than from the fist or the foot. Perhaps it could be argued that BK is just misunderstood; or perhaps we should all idolize him like Dick Vitale does. Whatever the case, if you smell an odor around, it isn't Bob Knight. Remember, he always comes out smelling like that rose!
Posted by Sports Dawg at 5:02 PM