It Just Wasn't the Same Without You 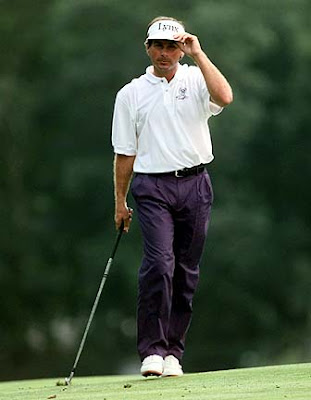 Fred Couples missed the cut at the Masters this year for the first time in 24 years at Augusta National. Couples won the coveted green jacket in 1992, and now shares the consecutive cuts made record with Gary Player. He missed this year's weekend field by just a single shot. He was at 4 over par 148 after opening Thursday with a 76.
Couples carries the nickname "Boom Boom" for his busting drives, but he is perhaps best recognized for a seemingly effortless swing and the results it produces. Maybe it was a game that came too easy and a chronically bad back that kept Freddie from being the elite golfer we wanted him to be. I suppose 'elite' means more wins, more majors, and more dominating performances. We certainly thought he had the game to accomplish these feats. Couples is a graduate of the University of Houston, where one of his roommates was CBS commentator Jim Nantz. Nantz has been accused of giving Fred a few "homer" calls, but I don't blame him. After all, Couples is one of the most popular golfers on the PGA tour. He has been named a President's Cup captain for the 2009 USA team, and as he approaches his 49th birthday, I expect we will see less and less of Boom Boom on the links. But Freddie has been, and is, a class act in his profession so it will always be good to see him tee it up in any tournament. And not to worry. he'll be back in Augusta next year. It will be time to begin that new cuts made streak!
Posted by Sports Dawg at 3:49 AM