Heros Are People Too 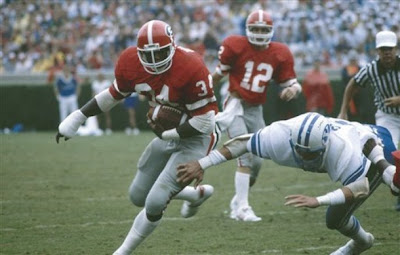 When I first heard about Herschel Walker's new book 'Breaking Free', I really didn't think too much about it. I knew it was about Dissociative Identity Disorder (DID), a malady that Herschel suffers from. I suppose my impressions were: just another book by another athlete. I had not seen Nightline's interview with Walker, so I was unaware the magnitude of his disorder. I had not heard about the dozen or more different personalities, the incidents with a pistol, the insecurities, and the memory lapses. For example, Herschel states he does not remember receiving the Heisman Award, nor does he recall putting a gun to his former wife's temple, as well as being unaware of breaking his hand at his counselor's office. To his credit, he doesn't deny these negative situations, he just can't remember them. As a UGA alumni, Herschel Walker is, and always will be, THE BIG DAWG. It's no problem for me to accept the fact that a high profile athlete has a significant problem. They have no exemptions or free passes in the real world. They get cut, they bleed. Just like you and I do. I stopped the 'Hero Worship' mess a long time ago. But as a 'Dawg", I can't just dismiss this as 'routine'. I wish for Herschel a healthy emotional state to go along with that tremendously healthy body. He is revered by the "Bulldog Nation". The next time he visits Sanford Stadium, and there will be a next time, the ovation he will receive will be momentous. The best college football running back wore an 'Oval G' on his helmet. And like we say: "Once a Dawg, ALWAYS a Dawg"! Get well Big Dawg!