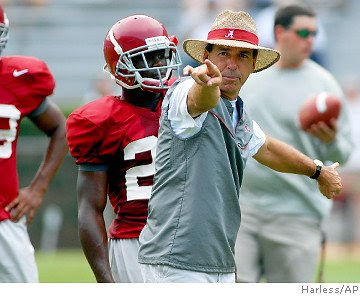 I've always liked Alabama. I've always wanted them to beat Auburn. I respect their gridiron history. And, I promise, I have tried to like Nick Saban. He just won't let me. I'm fully aware that he could care less if I, or anyone else for that matter, likes him or not. I can understand that. No problem. I watch his press conferences, and he takes arrogance to a whole new level. And these are press conferences with Crimson Tide people asking questions. People who are on his side (for now at least). ESPN replayed a segment of one conference Wednesday night. He was asked a question regarding the number of scholarships available versus the number of high school players Alabama signed in February. Evidently, they signed more kids than they had openings for ( I don't keep up with 'Bama, I just know my Dawgs are o.k. with the 85 limit). So, St. Nick goes on a tirade with the questioner. He tells the guy that no one asks about scholarship numbers, and he doesn't need to ask either. At one point he said that the fans don't care about scholarships. Whoa! You had 90,000+ show up last spring for a scrimmage and you don't think they care about scholarship numbers. Not only do they care, they already know all about it. I could care less about 'Bama's numbers. I just wonder why Saban seems to always be on the defensive. The above incident was only one scenario. He's confrontational at some point in the majority of tapes I've viewed. What Gives? Is he that insecure? Is the pressure on him to be the next Bear Bryant that enormous? I've heard he's a control freak, but lighten up Nicky! You don't own Alabama YET. You actually just share most of it with the UA people. Sometimes you even make Les Miles look like a choir boy, for goodness sake. Get some help. See a shrink. But if you continue with your little rants and raves, I hope Tubberfield kicks some of that arrogance out of you every December, and you've made me not like Alabama that much anymore. But I do thank you for one thing: You've made me appreciate Mark Richt even more than I already do. And that's one heck of a lot. By the way, he'll see you "Between the Hedges" on September 27th.
Perhaps we can give you an excuse to be a jerk with the media. After all. talking about a butt kicking will make you show your own butt!
Posted by Sports Dawg at 3:37 PM