A First For Tom Glavine 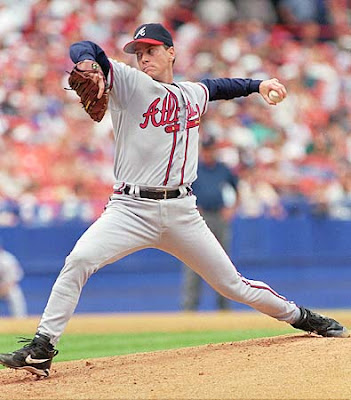 For the first time in his major league career, Tom Glavine has been placed on the Disabled List.
After 22 years and 303 victories, a strained right hamstring will force the left-hander to miss a few starts. Glavine is 42 years old, and last year with the Mets he struggled late in the season. Perhaps this early stint on the DL will buy the Braves a few more productive games from him during the latter part of this season. It might not be realistic to expect 200+ innings from him at this stage in his career. In fact, 175 or less might be the case. That would translate into 5 or 6 innings per start, and if the majority of those starts are productive, Glavine could end up with 12 to 15 wins. If this comes to pass, the Braves would probably have a good shot at the post season, and Glavine's one year contract would turn out to be a good deal. It does appear that the 2008 Braves club is one capable of putting runs on the board, so this may bode well for the veteran pitcher. Everyone knows how Tom loves to nibble away at the corners of the plate, so umpires who will give him those strikes on the 'black part of the plate' are also crucial for his success. During his first stint with Atlanta, I loved that type of guy behind the plate. But when he pitched for the Mets, I hated to see the ump give him that 'outside strike'. It will be interesting to see Glavine's form when he returns from the DL. Here's hoping that his control is sharp, and that his stamina improves as the season progresses. We're looking for those liberal strike zone umpires in The A-T-L; Glavine's not a Met anymore!
Posted by Sports Dawg at 1:49 PM