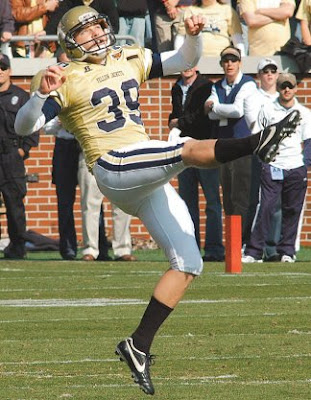 I promise you: it is not easy for a 'Dawg' to give kudos to a 'Bee'. It isn't normal. It isn't the thing to do. It isn't right. I've never had any problem showering the Jackets in an unflattering manner. That is the thing to do! But this is a little different. Durant Brooks is a good guy. Didn't you see him holding for Brandon Coutu in the Senior Bowl? That's what I like to see: a Tech man working FOR a Georgia man. As the old saying goes, "it does a body good"! Now on to other positives. His mentor is the legendary punter Ray Guy, also a product of the great state of Georgia. Brooks gives Guy credit for much of his success. He began going to Guy's camps as a high school junior, and the two have had a great relationship as teacher/student/friends since that time. Durant credits his mom, LuAnne, for 'planting the seeds' of his introduction to Guy. He still visits the former Oakland Raider for 'private sessions' when the need arises and the time allows. How fitting that Durant would win the Ray Guy Award as the nation's top punter after last year's stellar senior season. Durant is now in anticipation of the NFL Draft this weekend. Some projections have him going as high as the third round. No punter has been selected that early since the 2oo4 draft. Scouts are impressed by the placements of his kicks, his 'big leg', and the hang time of his kicks. Durant also possesses the intangibles of work ethic, demeanor, and character. Regardless of the round, he will be a great selection for some NFL franchise. Whether the team is San Francisco, Green Bay, Washington, etc., I hope he goes early and signs a huge contract. After all, those Tech guys would hate to see him working for a Dawg again! Good luck Durant, because you really are a good guy and you deserve it! (And now I can go back to being a 'Tech-Basher'. Yea, now that feels right!)