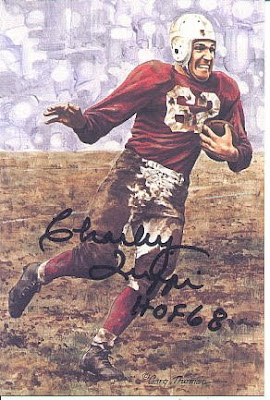 The last time the Cardinals professional football franchise won a championship was 1947, and they were the Chicago Cardinals. The star offensive player for those Cardinals was Charlie Trippi, who had 206 yards of total offense and two touchdowns, as Chicago defeated the Philadelphia Eagles 28-21 for the title. Trippi was inducted into the pro football Hall of Fame in 1968. And where did Mr. Trippi play his college ball, you might ask? None other than the University of Georgia, where he was a two-time All-American. He was also the Most Valuable Player in the 1943 Rose Bowl, where his Bulldogs defeated UCLA 9-0. Perhaps the Arizona Cardinals can make Charlie Trippi proud by bringing another championship to this once proud franchise by defeating the Pittsburgh Steelers in the Super Bowl Sunday. But they'll have to do it from the role of underdogs, as the Steelers are a seven point favorite.