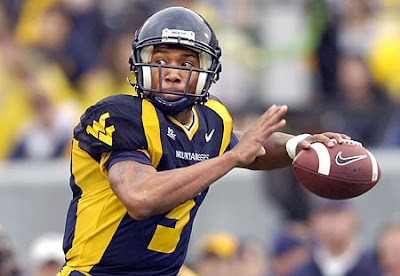 Many NFL talent scouts believe West Virginia's Pat White will be a receiver at the next level and not a quarterback where he excelled for the Mountaineers. White is out to prove those experts wrong. Last weekend he led the South to a 35-18 victory in the Senior Bowl, and more of his leading came with his arm as opposed to with his feet. He passed for 95 yards while leading his team to two scoring drives, all the while exhibiting a surprisingly strong throwing arm. He was named the game's MVP. I could see White performing as an NFL quarterback as far as talent is concerned, but I just don't see his body taking that punishment week in and week out at that level. I'm guessing that he would have a longer, more productive professional career not touching the ball every play as opposed to handling it every snap behind center. Nevertheless, speed kills. And with the speed and quickness that Pat White possesses, he'll be a killer at the next level. Regardless of the position he plays.