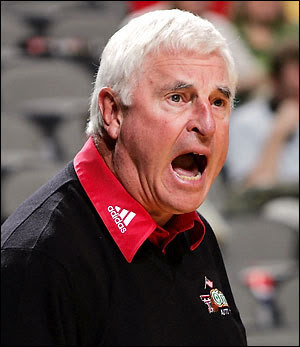 Legendary columnist for the Atlanta Constitution, Furman Bisher, reports that ESPN's Bob Knight is interested in the recently vacated University of Georgia men's basketball coaching position. In fact, so interested that Bisher relates a source as saying if Knight were to be offered the job, he would accept it. Now wouldn't that shake up the world of men's college hoops?! I've never been a big fan of Coach Knight and his methods of dealing with his players, but he just might be the hard nosed disciplinarian Georgia basketball needs. After all, he would bring credibility to a program that isn't even on the credibility radar. Not even a bleep on the screen. And speaking of bleeps, he would bring out plenty of those in the press room. What the heck, go get Bobby, Damon Evans. I just can't imagine Bobby Knight and Mark Richt coaching at the same university. But on second thought, they each could probably use a good dose of each other!