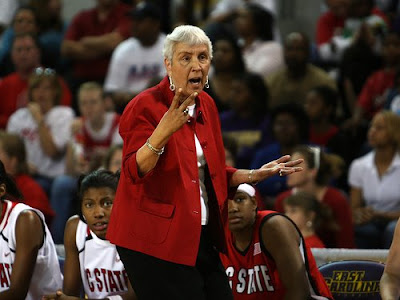 We all know that cancer is in so many cases an overpowering adversary. And we also know that very often individuals turn the tables and become cancer's adversary. These particular individuals just won't let cancer have its way with them without a long, hard, inspirational fight to the bitter end. I'm sure the image of someone you remember like this comes to mind. Even though I don't really know that much about N.C State lady hoops, from everything I've read about their super-successful coach, Kay Yow, I doubt that cancer has run up with a more fierce competitor than Yow. She had fought the disease since 1987, all the while managing to win more than 700 basketball games, teaching young women great life values, and inspiring countless cancer patients to battle their opponent with determination, desire, character, dignity and class.
Cancer did not defeat Kay Yow on January 24th, the game clock just ran out. Maybe even just a shot-clock violation. She's planted too many seeds, done too much good, and left too many memories for this to be interpreted as a defeat. Her cancer is finally gone, but Kay Yow continues to live on. Thank you Kay, and Godspeed!
Posted by Sports Dawg at 11:22 AM