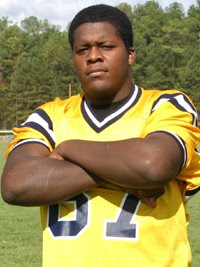 Georgia's Mark Richt has never recruited a valedictorian. Perhaps that is about to change. Troup County(Ga) offensive lineman Chris Burnette is in a competition not on the football field, but in the classroom to be the valedictorian of his senior class. The stiff competition involves Burnett and two of his classmates. As a little added incentive for Burnette, Richt has promised to be at his graduation if he finishes at the top of his class. The 6'3" 286 pound lineman committed to UGA early and had planned to enroll for classes beginning in January, but altered his plans and remained at Troup in order to vie for the honor of being the top graduate in his high school class. It sounds as if Mr. Burnett will bring more than his physical prowess to Athens. This young man will bring the more important qualities of leadership, responsibility, work ethic and character. I'd say one day he will be a "Top Dawg" in every aspect.