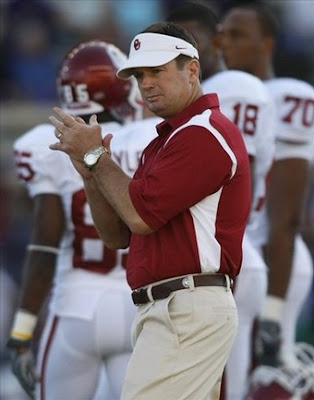 On January 1st, Oklahoma head coach Bob Stoops received a $3 million bonus from the university. Yes, a $3 million bonus. He received this money as a "stay bonus" which was a part of his initial contract. After completing his tenth year as the head Sooner on December 31st, 2008 the bucks were his. You just know that there are some professors at Oklahoma who have been teaching at the university longer than that who are thinking "I didn't even get a gold watch at thirty years". Oh well, such is the game and that game is always about the almighty dollar! Oh yea, one more thing in that regard. If he defeats Urban Meyer's Florida Gators next week for the National Championship, he gets yet another bonus of $250,000. I would say that Bob Stoops, as well as other Division I head coaches, is "Recession Proof"!