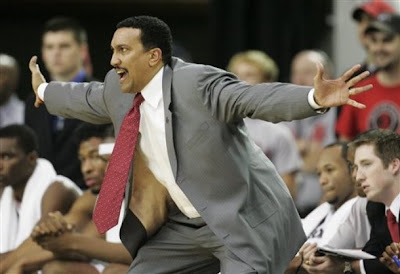 I remember when Georgia signed Dennis Felton as its head men's basketball coach in 2003, one of the things I heard about him was that UGA had someone to compete with Kentucky's Tubby Smith. Felton had evidently held his own in his prior match-ups with Tubby, and he did compete somewhat with Smith in the conference. The thing I didn't hear was that Smith was the only one he would compete well against! And Tubby isn't around anymore! Man oh man, this gig just isn't working out. At all. I realize UGA is not exactly a 'basketball school', but after Felton's five complete seasons in the classic city, the Dawgs should at least be competitive night in and night out. Georgia is not only NOT competitive, they are pathetic for a major college program (maybe even for some high school programs). In fairness to Felton, he did inherit a program in shambles. He's taken it out of the 'shambles' and put it right into the 'brambles'. I think it's just about time to give someone else a chance with this potential basketball juggernaut. After all, Tubby isn't coming back any time soon.