Bobby Cremins: Good For The Game 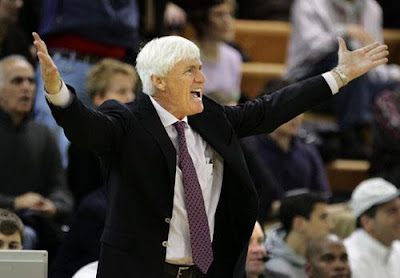 When Bobby Cremins decided to coach college basketball again in 2006-07, basketball should have stood up and applauded. The College of Charleston did a good days work in bringing Cremins back into the game. After all, there's a limit to how much an old basketball coach is willing to put in to lowering his handicap. Cremins had reached that limit. After all, it had been six years since he left Georgia Tech and he had planned to be away from the court just one year. He was tired of living the good life. Because he didn't have his life back. His heart and soul. He needed the rigors of college coaching again. He does not have his C of C Cougars at the level he aspires for them, but he realizes it is a work in progress. He desperately wants to coach in the NCAA tournament again. He longs for "the thrill of victory", even if it means enduring "the agony of defeat" to get there again. He will rebuild the Charleston program. He will again compete in "the big dance". He'll get it done, because he has the time. And most importantly, he has his life back, along with his heart and soul.