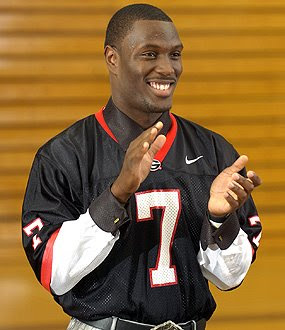 National signing day is more than a month old, but it took that long for Georgia to cap off its 2009 recruiting class with the signing yesterday of hybrid tight end Orson Charles. Only Herschel Walker held the Bulldogs in suspense longer, waiting until April to make his college choice known. Charles, who is a senior at Tampa's Plant High, will join teammate and quarterback Aaron Murray in Athens. His long recruiting process left him with three finalists that included Georgia, Southern Cal, and Tennessee. He is ranked as the number three tight end in the country, as well as the number seven wide receiver. Incidentally, he has been promised Matthew Stafford's number 7 jersey, his high school number. Charles is a great addition to an already strong Bulldog class. It seems that many times when Georgia goes down to the wire as a finalist with a particular prospect, the Dawgs lose out. Not this time, however. Orson Charles may have taken long, but he certainly did not pick wrong!