Jordan Schafer: Is the Wait Over? 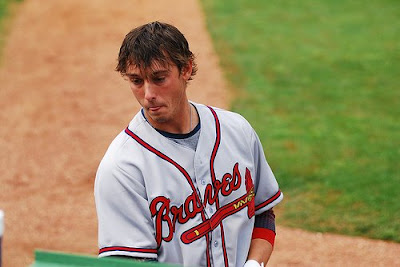 Jordan Schafer is a "Five-Tool" centerfielder. He can hit, he's showing he can hit with power, he's a tremendous defensive outfielder with an above average arm, and he runs well. Brian McCann says he's "tooled out of his mind". Bobby Cox feels he has all the defensive skills once possessed by the Gold-Glover, Andruw Jones. Schafer is having great spring for the Braves, batting .396 with seven extra-base hits and five stolen bases. The one negative thus far is that he is too much of a "free swinger", much like teammate Jeff Francoeur. He will strike out often, and will have periods where he struggles at the plate. Let's hope he finds an understanding of the strike zone faster than did Francoeur. He seems to be willing to work hard to get better, and carries with that a good attitude. The Braves will need him to mature as a ballplayer quickly and solidify the center field position in order for them to return to contention in the National League East. If he does indeed find himself to be the opening day centerfielder for Atlanta, here's hoping he holds on as the starter for a long time. We're all ready for the wait to be over.