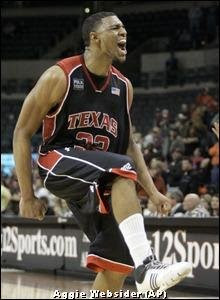 Mike Singletary scored 43 points, 29 of them consecutively, as he led Texas Tech back from 21 points down to upset Texas A&M 88-83 in the opening round of the Big 12 tournament. Let me repeat, he scored 29 consecutive points. No one else on his team scored during that streak. That is almost unbelievable. Talk about being in "the zone". He literally put his Red Raider team on his back and carried it to victory. It has to be one one the greatest individual performance in NCAA history. But think about this, Singletary, a sophomore, didn't even start the game. He did all of this coming off the bench. His previous game high was 25 points, and his 43 points were a Big 12 tournament record.